“Retreat is a time to sit quietly and wait for our souls to catch up with us, a time to invite our souls back into the center.”

The History of The Uplands Center 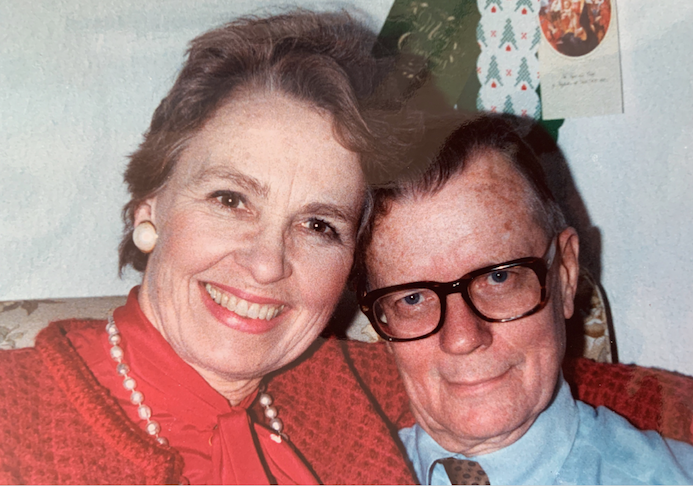 Activists before their time, philanthropists Arthur and Joann Rasmussen embraced conservationism over the course of their long lives, stemming back to the 1950s. Dedicated to preserving nature’s wild and pristine beauty, they bought the Uplands property in the 1980s. Uniquely stunning for its sweeping landscape and mountain vistas, Arthur and Joann built a gracious hilltop home at the Uplands in 1990, and lived out the rest of their days there. In keeping with their lifelong mantra to “never resist a generous impulse,” they donated the Uplands property and their remaining estate to become a 501c3 nonprofit organization called The Uplands Foundation, the principal funder of the Uplands Center.

The work of the Foundation continues the Rasmussens’ lifelong commitment to serve others and catalyze meaningful change through education, social service and philanthropy. The Rasmussens’ embrace of environmental consciousness is also reflected in the work of the Uplands, which honors the ethos that all forms of life are interconnected.

The 290 acre Uplands property is comprised of two contiguous dairy farms that for generations were worked by two settler families: Scottish immigrant Alexander Tweedie, (who arrived in 1849) and Revolutionary War soldier and prisoner of war Levi Hanford who settled the land in 1808 and is buried on site in the tiny Hanford Family Cemetery.

The Uplands Center resides on the ancestral homelands of the Lenni Lenape people, the original stewards of the land we now call Delaware County. The Lenape called themselves “Minsi” or “people of the stony country,” and lived in the Walton area for over 10,000 years. This first nation was forcibly removed from the land and relocated west in the 1800’s. We invite you to join the Uplands Center in donating to the Lenape Center Project, a nonprofit organization working toward creating a cultural center in NYC.

The Barns at The Uplands

The picturesque red barns at the Uplands Center on Dunk Hill Road are a vestige of the dairy industry of the Walton area in the late 1880s to mid-1900s. The barns are located on two individual land parcels on Dunk Hill Road which were home to notable, early Walton settlers.

Both parcels were part of the Peter Van Brugh Livingston Land Patent (lots 60 and 76) granted in colonial times by the King of England. The parcel at 2410 Dunk Hill Road was first settled in 1808 by the family of a Revolutionary War soldier and prisoner of war, Levi Hanford, who is buried on site in the tiny Hanford Family Cemetery. The parcel contiguous to the north at 2641 Dunk Hill Road was settled by a Scottish immigrant, Alexander Tweedie, who came to the US in 1849 and farmed on Dunk Hill Road.

These two parcels now comprise the Uplands Center, a not-for-profit wellness retreat center. The barns which still stand on each parcel are a monument to the land’s historic use as active dairy farms in the late 19th to mid-20th centuries and help maintain the rural, agricultural feel of the area.

At 2641 Dunk Hill Road stands “The Tweedie Barn” a classic, red, three-bay, three-story dairy barn that was completed in 1910. It is a cavernous, banked barn with a ramp made of soil and local stone. The ramp once allowed hay wagons easy access to the barn’s third floor. Its vertical board and batten siding is painted red with white trim The barn’s post and beam interior structure is held together with mill-sawed and hand hewn, mortise and tenon beams. Its gabled roof with a cupola at its top is flanked by a large white silo likely added in the 1900s after the Ontario and Western Railroad extended its rail line to the Walton and Delhi, NY area. This railroad extension created economic opportunity for Walton area dairy farms to send butter and cheese to New York City. Increased dairy demand encouraged local Walton farmers to increase the size of their herds and subsequently to add silos to existing barns to meet the need for increased storage of silage to feed their cattle.

At 2410 Dunk Hill Road is a sister barn having many of the same attributes as the Tweedie barn. Alongside the barn are the bases of two silos that are no longer standing but testify to the large size of herds and the need for silage storage. 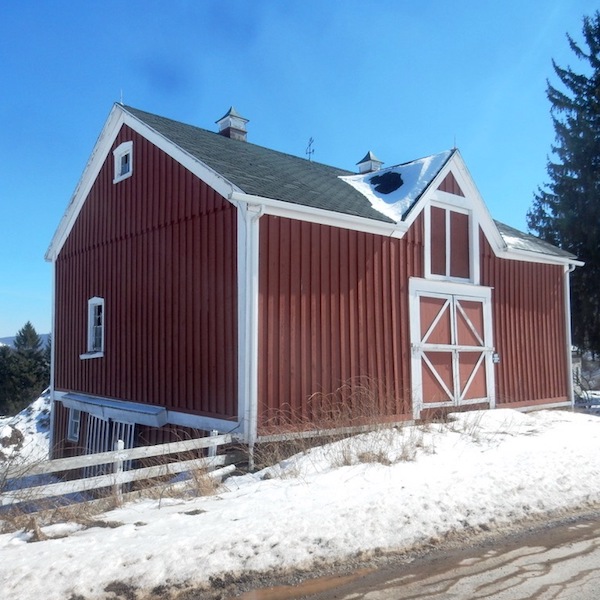 Also at 2410 Dunk Hill Road is a two-story red barn. The second story is accessed from an eve side banked door. The bottom floor is built into the hill and was used as an animal barn with the second story a place for hay storage.